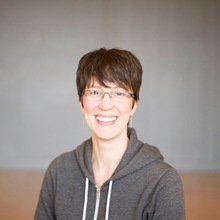 I took my first yoga class in 2005 on the invitation of a friend, and at that time, teaching yoga was the farthest thing from my mind. I was excited about the idea of rehabbing a physical injury I had incurred as a bike-commuter and about finding a few moments of relaxation – something that was missing from the rest of my life. I continued to attend classes casually for the next few years, and on a Saturday morning in 2008, came in to The Bhaktishop for a class with Lisa Mae. It was my first time at the studio and I still remember the way that I felt when I left. She spoke in poetic language, making metaphors of the body and the breath, and the class put me in touch with something I didn’t even realize I’d been seeking. Less than a year later I would join The Bhaktishop’s yoga school program to deepen my understanding of the practice.

Within the year of the teacher training program I went on to complete three apprenticeships with three different teachers, meeting one-on-one for more specialized training and conversation. Although it had not been my intention in attending the yoga school program, with a little nudging, I began teaching classes at the Shop to beginners, and soon after, a restorative yoga class. I like to tease that I could do a “good impression of a calm person,” but that it would be a few more years before I learned how to really use these practices to find relief from my high level of anxiety. In the years that followed I would attend many workshops on teaching methodology, philosophy, Sanskrit, anatomy, and Ayurveda. I completed an Iyengar immersion with Julie Gudmestad, and more recently, became certified by Judith Lasater for teaching restorative yoga. I also completed my Masters in Counseling with an emphasis in Depth Psychology and began a private practice as a mental health counselor.

Over the course of my 10 years with yoga I have found myself steering more and more toward the quieter aspects of the practice. I prefer to take and teach classes that offer some time for stillness, breath and body awareness. Where standing postures are involved I strive to move mindfully, aware of the alignment of the body, and to use the practice as a moving meditation.

A soothing, restful mix of simple movement for any level with restorative yoga shapes

Harmony Class: A soothing, restful mix of simple movement for any level with restorative yoga shapes
83:00
We suggest moving this party over to a full size window.
You'll enjoy it way more.
Close
Go Fullscreen