Get warm from the inside with this centering class that teaches skills to keep kness safe and healthy! | taught by Monicka Koneski
Buy $3.00 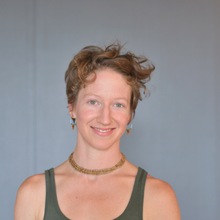 When I had the good fortune of connecting with Lisa Mae Osborn shortly after moving to Portland in '05, the seeds that had been planted in the years prior began to take root. I began to dive more deeply into the study of yogic practices, and I absolutely knew that my heart had come home when I was introduced to the bhakti practice of sri kirtana (devotional chanting). An yet at that point I had still no idea how impactful it would be or how serious I would become about desiring my life to be overtaken by spiritual pursuit. It was as though something within me started to wake up, and the things in my life that inhibited my growth began to fall, often painfully but beautifully, away.

I have been teaching movement now (everything from creative movement for kids to modern dance to therapeutic private yoga classes to many things in between) since 1999. I have had the honor of being a part of The Bhaktishop Yoga Center since its inception, and under the gentle and encouraging guidance of Lisa Mae Osborn, as well as a number of other inspired and influential teachers, I have completed more than 500+ hours of yoga education and training. When I am not teaching or studying yoga, I am either engaged in my work as a licensed massage therapist where I am able to spend valuable one-on-one time with those who are looking to find ease, presence, and balance in their bodies, or wrapped in love and life lessons with my dear little son, Kavi. It is my goal as a bodywork practitioner, anatomy and kinesiology geek, yoga teacher, Mama, and student of bhakti yoga to serve and honor each individual that I encounter, whether on the mat or off, in the best and truest way that I know how. Movement is still endlessly fascinating to me, but it is truly the connection to Self and Source that we may encounter while engaged in yoga practices that has me hooked.

Monicka uses clear cues and anatomical skill to help you understand your knees better, so they can be safe and healthy for a long time.You'll use a stretchy thera-band, blocks, and imagery as she guides you through simple movement to warm your joints and make you feel centered and clear. Great morning practice! Props: Resistance band, bolster, 2 blocks and a blanket. 60 minutes.